Avast cartoon dog in glowing 3D illuminates the night sky – along with a luminous giraffe, giant purple orchids, a psychedelic horse and chariot, trains, planes, abstract art, a radiant walk-in temple… and more dogs, many more dogs. It is Chinese Year of the Dog and Taiwan is celebrating, as it does each year, with its spectacular National Lantern Festival. 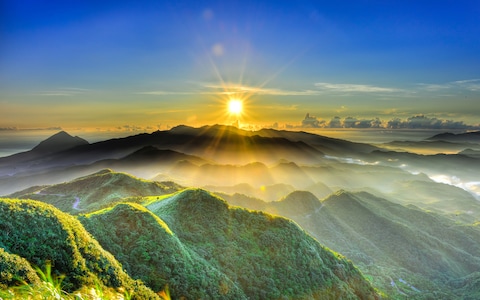 A very Taiwanese mix of ancient traditional and ultra-contemporary, fun and function, the event attracts half the population of the nation across its three weeks, and – one of its raisons d’être – thousands of foreign visitors. Most tourists to Taiwan are Asian but numbers from the West are growing – and UK visitors now have easier access than ever before with direct flights to Taipei five times a week from this week and daily departures planned by the end of the year.

Few people in the UK know much about Taiwan, except perhaps that it’s that long thin island off the south-east coast of China that is both Chinese and not Chinese. The population is more than 95 per cent ethnic Chinese, China claims the territory and a few in Taiwan still claim China, but whatever the politics, for tourists, Taiwan is a distinct country. It has its own government – democratic since 1996 – visa rules (none required by Britons staying up to 90 days), airline, local life and culture. Taiwan is keen to attract more Europeans and is selling itself as “an easy slice of Asia”.

Since 2013, everyone in Taiwan – including tourists – have been able to access a public Wi-Fi network free of charge.

“Diners sit on loos decorated with cartoon toilet seats and tuck into novelty dishes – including chocolate ice cream styled to resemble faeces – eaten from miniature cisterns and bedpans: a truly weird culinary experience that’s a big hit with young Taiwanese,” wrote Sally Howard for Telegraph Travel back in 2015. Each to their own.

And a bling monastery

“Retail opportunities are not typically associated with monastic orders, but there is nothing typical about the gargantuan Chung Tai Chan Monastery in Puli Town, where tourists are escorted by saffron-robed monks sporting photo identity cards and earphones and by microphone-wired security guards,” says Anthony Lambert, a regular contributor to Telegraph Travel. “The $190,000 woodcarvings in the shop seem to be the least of their worries. If Mecca is turning into Las Vegas, as a report once suggested, the Chung Tai Chan Monastery is more Canary Wharf meets Las Vegas. The colossal structure, finished around the year 2000, dominates the surrounding countryside. Its gold-topped stupa on a 37-storey tower is flanked by sloping barrack blocks for the 1,600 monks, ending in wings with faux battlements, machicolations and arrow slits.”

It has lots of billionaires

As of 2016, Taiwan was home to 25 billionaires. That’s more than Spain and only two less than Japan. Pretty impressive for its size.

They enjoy a cuppa

The average resident of Taiwan gets through 1.85kg of tea per year. Only 16 places drink more, including, of course, Britain (2.06kg).

But Starbucks has taken over

There are 16.74 branches of the cafe per million inhabitants, making Taiwan the 10th most Starbucks-saturated place on the planet.

A Big Mac might taste the same the world over – but the price varies wildly. Head to the source – America – and you’ll pay a shade over $5. But in Taiwan they cost just $2.16, making it one of the cheapest places on Earth to eat the double-decker burger.

An 86km narrow gauge railway runs from the mountain resort of Alishan. Opened in 1912, it tackles dozens of switchbacks, 50 tunnels and more than 70 wooden bridges. At the other end of the rail spectrum is Taiwan’s high speed network, which opened in 2007 and links the capital, Taipei, to the southern city of Kaohsiung (reaching speeds of 186mph along the way).

It still has the death penalty

Just four countries considered to be industrialised still execute criminals: the US, Japan, Singapore and Taiwan.

And was once home to the tallest building in the world

The tallest building in the world between 2004 and 2010, when the Burj Khalifa in Dubai took over, Taipei101 (the figure denoting the number of floors) towers over the capital, serving as an icon for the modern evolution of the country. Its lifts reach speeds of 37.6mph, flinging passengers from the fifth to the 89th floor in 37 seconds. There is an observation deck on the 91st floor, some 1,285 feet above the ground.

I start in the capital, at the top of the town. Whisked up in the fastest lifts in the world I arrive at the 89th floor of Taipei 101, the tallest building on Earth when constructed. It now stands at number eight but still lords it over the city like a modern hilltop pagoda. The views are spectacular – patchworks of coloured rooftops with little New York City-style yellow taxis beetling along between. The scene is punctuated by modern architecture projects (one stalled by corruption, another about to be clad in 23,000 trees) while around the edges, as if defending the capital, crouch the densely green Four Beasts Mountains – Elephant, Tiger, Leopard and Lion. Down the centre of Taipei 101 hangs the damper ball – a massive weight, oddly elegant and, thankfully, still. It is state-of-the-art technology preventing this 1,670ft tower from swaying excessively in tornadoes and earthquakes, not uncommon on this Ring of Fire island. I decide to buy into the Chinese love of talismans and purchase a dinky red plastic “Damper Baby” in hopes of warding off tremors during my trip (it seems to work!).

Back at ground level, I wander the trendy pedestrianised streets of Ximending, where layer upon layer of brightly coloured posters, banners, storefronts and signs sweet-talk the crowds milling around on the chequered paving. Cute vies with Kung Fu, food with fashion, cartoon kitsch with genuine arts. “Creative entrepreneurs” (a favoured class in today’s Taiwan) show off their wares in repurposed historic buildings and a crowd watches open-mouthed as a young male dancer rolls round with sublime fluidity in an oversized hoop. 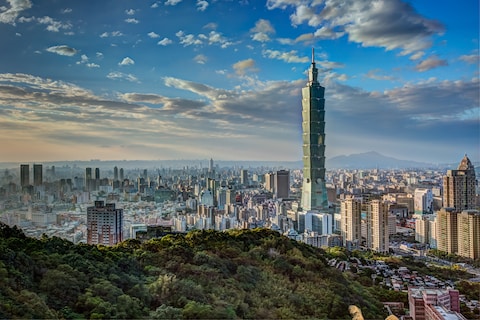 One moment I feel as though I am in Tokyo, the next in Beijing – but Taipei is more relaxed than either. People are friendly but not intrusive, polite without being formal, it’s clean but not pristine. Men and women coalesce, as do young and old.

On an early morning outing to Democracy Square (or Liberty Square) I watch a young hipster struggle to copy his elders at tai chi, while in colourful temples tucked between apartment blocks and convenience stores, Taiwanese of all ages and styles crowd in to bow, pray and wave their belongings above the burning incense. 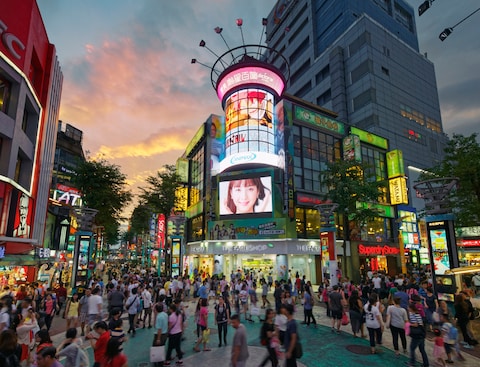 For anyone visiting “the Orient” for the first time, Taipei – and indeed Taiwan – is a great introduction.

There’s world-class art. The cavernous National Palace Museum is home to one of the greatest collections of Chinese art. When Chiang Kai-shek fled to Taiwan in 1949 having lost China’s civil war, he brought with him 600,000 pieces from the Imperial collection. Most of the rest remains in the Beijing’s Forbidden City – and China has never been happy that 20 per cent of the emperors’ proudest possessions are in Taipei. 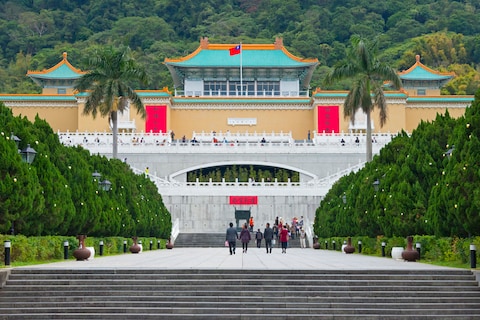 With so many remarkable artefacts, the museum rotates its collection, but some things are always on view including the Qing jadeite cabbage. Everyone queues up to see this wonder, but I find the millennia-old decorated bronzes and beautiful Chinese paintings more compelling. That said, I do enjoy eating the cabbage at the restaurant next door with several amusing (and tasty) dishes mimicking star exhibits in the museum.

Food is one of Taiwan’s strengths – and it’s never far away, whether you opt for fine dining or night markets. From traditional noodle or dumpling dishes to squid and cheese; tofu pudding (like vegan crème brûlée) to ice cream pancakes with peanut and coriander, the choice is vast. 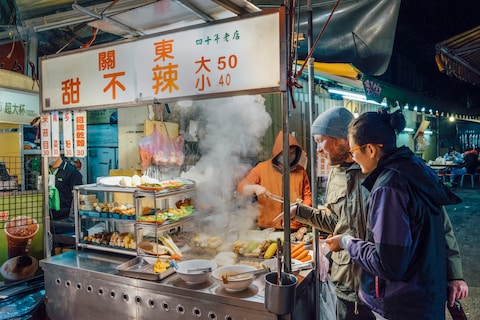 It is time to go beyond the capital and Taiwan’s High Speed Rail whizzes me south. Along the coastal plains there is barely a break in the urban sprawl, but beyond the central mountains rise steep and verdant. These are home to outdoor activities such as trekking and mountain biking, to aboriginal tribes (two per cent of the population) and to Taiwan’s tea plantations. The island produces aromatic oolong teas, which I sample in something akin to a wine-tasting in a wooden teahouse in Tainan. 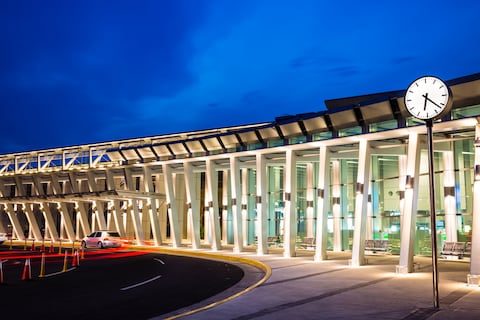 Taiwan’s first capital, Tainan, remains its historic heart. Though much of the city is modern, there are rows of traditional Chinese shop-houses around Shennong Street (named for the God-King of Medicine whose temple guards the road).

Tainan has a temple around every corner. I stroll around the calm, spacious courtyards of Taiwan’s oldest Confucian temple, before immersing myself in a bustle of Taoists. Night-time visits are atmospheric, particularly to the remains of Dutch Fort Provintia (the East India Company briefly ruled Taiwan) now subsumed into a floodlit temple complex. Standing before the terrifying-looking “Education God” who brandishes a calligraphy brush like a samurai sword, I throw divination blocks which land in the configuration that means “yes”, and I am invited to help myself to a branded pencil.

Across the road is the impressive Grand Matsu Temple, with a 13ft statue of the sea goddess, this island nation’s favourite deity. She looks benign, but the temple has a less-than-peaceful history. It started life as the palace of a 17th-century Ming prince who reacted to imminent overpowering by the Qing by killing himself, preceded by his five concubines who hung themselves from the beam in his chamber, now the temple’s back hall. Chiang Kai-shek’s, it seems, was not the first Chinese “government in exile” to look back at the mainland from Taiwan. 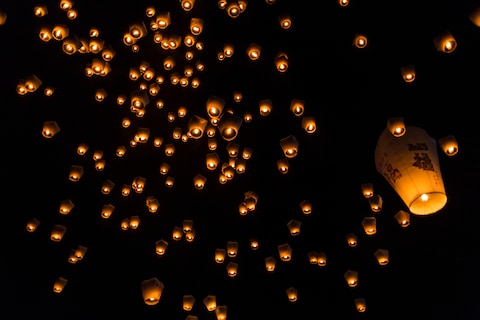 Chiang was, though, more successful at holding on to his life and – at least local – power. Though his qualities are much debated, he is central to the foundation of modern Taiwan.

When Chiang arrived in 1949 he brought with him not only Imperial treasure but some two million people, many of them single soldiers. To house them he built walled compounds of identikit bungalows. As the occupants have aged and died these “Military Dependents’ Villages” have mostly been demolished. One, though, has taken on a new life.

In a nondescript suburb of Taiwan’s second city, Taichung, an elderly veteran (now 96) has painted all over his settlement. Known as Grandpa Rainbow Village, every inch is brightly muralled with figures, animals, colourful patterns and innocent symbols of love.

Rainbow Village has the same typical Taiwanese mix of artistry, function and fun that pervades the Lantern Festival. As the towering 69ft main lantern throws beams of light into the night sky, a troop of traditional drummers reminds me momentarily of the opening ceremony of the Beijing Olympics – but they are different, too. The Beijing drummers were so minutely in time they were almost scary. Taiwan’s drummers are brilliant, but they are human.

Taiwan is Chinese and not Chinese; enjoyably, interestingly different from the West, but not alien. It is indeed “an easy slice of Asia”.

How to get there

From this week the Taiwanese flag carrier China Airlines (china-arlines.com) increased to five the number of direct flights per week from London Gatwick to Taipei. Flights take 13 hours and cost from £610 return.