RARE OCCURRENCE: Most sea turtles go to beaches in Siaoliouciou, Orchid Island or Penghu to lay their eggs, and do not often visit Dawan Beach, a veterinarian said

This was the second time since 2017 that baby sea turtles were found in Kenting National Park. 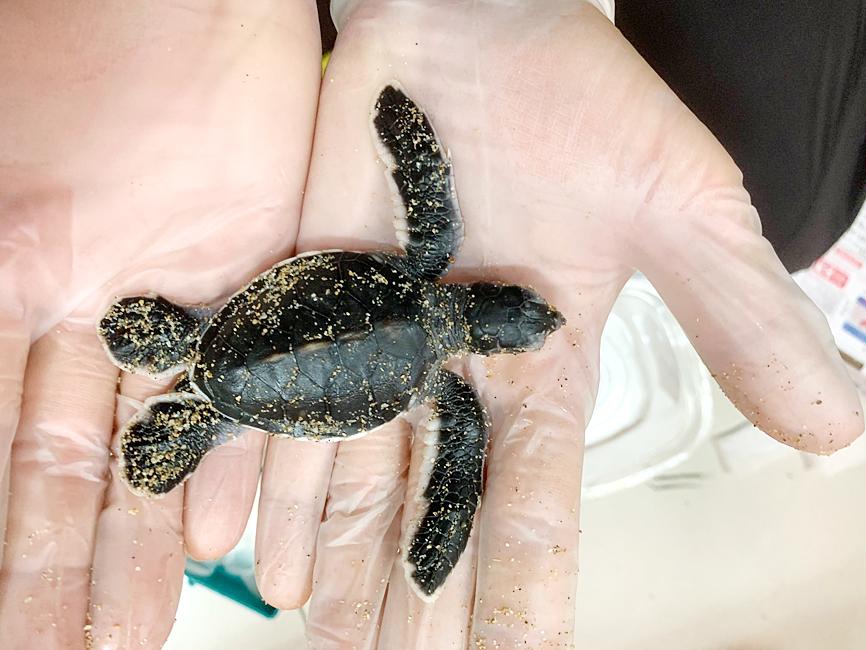 Representatives from the office, coast guard and the museum arrived at the beach, as the turtles were crawling toward the lights at the hotel.

As baby turtles can die of exhaustion if they do not find their way to the sea, staff from the agencies worked to help them along.

After measuring their shells and checking their bodies for injuries, staff used a white container to carry the turtles to the beach and carefully released them into the ocean.

Museum veterinarian Lee Tsung-hsien (李宗賢) yesterday said that the breeding season for sea turtles is from May to October, with the peak occurring in July and August.

Due to topographical changes and abandoned fishnets littering the coastline, sea turtles in the past few years rarely come ashore to lay their eggs in Taiwan proper, he said.

Most turtles lay their eggs at beaches on Siaoliouciou Island (小琉球), Penghu and Orchid Island (Lanyu, 蘭嶼), he said.

Kenting is a natural habitat for sea turtles, but not many frequent the beaches in the park, because the sands are often packed with tourists, making it difficult for turtles to dig holes to lay their eggs, Lee said.

As such, turtle eggs are mostly found on beaches with relatively few people, he added.

Animal conservationists last month found traces that could have been left by sea turtles on Dawan Beach, Lee said, adding that female turtles were probably looking for a proper beach to lay their eggs.

Once they find a suitable place, they tend to return to the same beach six to seven times, he said.

The 24 baby sea turtles probably came from different mothers which laid the eggs about two months ago, he said, adding that more sea turtle eggs could be hatched at the beach in the days to come.

“It is exciting to know that sea turtles have returned to the Hengchun Peninsula again to lay their eggs. We hope that visitors will avoid Dawan Beach at night, when turtles would come ashore,” Lee said. “We will also speak with hotels about dimming their lights so that baby sea turtles would not go astray.”

“Beach visitors should refill the sandpits before they take off and leave no items behind to facilitate the sea turtles’ trips to the beach,” Lee added.

The rise of Taiwan: Why the world is discovering this overlooked corner of Asia